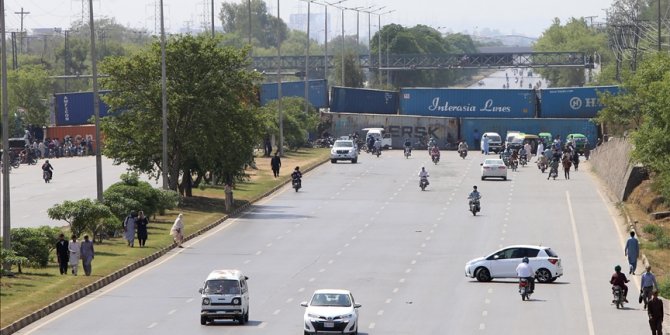 Imran Khan is pressing to hold fresh elections this year, which are otherwise due in 2023

Clashes were reported in many districts of Punjab as Pakistan authorities blocked roads leading to the capital Islamabad ahead of a major protest planned by ousted Prime Minister Imran Khan and his supporters.

Khan, who was removed after a parliamentary no-trust motion last month, announced the "long march" to press his demand for the dissolution of parliament, and holding of fresh elections, which are otherwise due in 2023.

The government has rejected his demands, announcing that the current setup would continue until August next year.

In the northeastern city of Lahore, police fired teargas shells to disperse hundreds of Pakistan Tehreek-e-Insaf (PTI) workers who gathered at different points to set off on the march to Islamabad.

Angry protesters pelted stones and threw back teargas shells toward police before scores of them were taken into custody.

The PTI claimed that over 1,000 workers were detained in overnight raids across northeastern Punjab province in an attempt to foil the march.

Ata Tarar, a spokesman for the provincial government, told reporters that only 250 workers had been detained as a "preemptive action" to maintain law and order.

A constable was allegedly shot dead by a local PTI leader when the police raided his home in Lahore on late Sunday night.

Police have placed shipping containers on several roads leading to the capital, which is about 270 kilometers (170 miles) northwest.

Khan is expected to lead the march from northwestern Khyber Pakhtunkhwa province, which is governed by his party.

The former premier has urged supporters, especially young people, to remove the barricades to reach the Srinagar Highway in Islamabad "at any cost."

Interior Minister Rana Sanaullah said the government would not allow the marchers to enter the capital, warning that they would be tackled with "iron hands" if they violated the law.

Meanwhile, the country's top court has summoned senior government officials for explanations on the roadblocks and arrests.