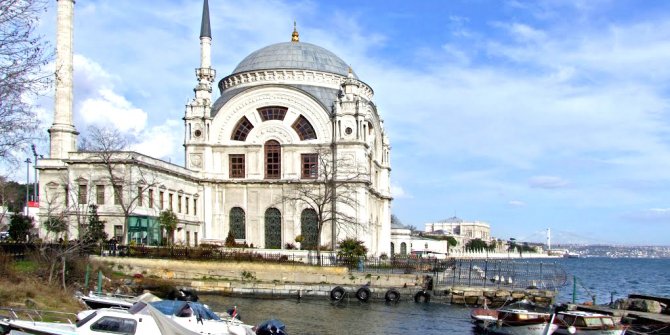 Dolmabahçe Mosque is a building that was initiated by Sultan Abdülmecit's mother Bezmialem Valide Sultan and completed by Sultan Abdülmecit upon his death and designed by Garabet Balyan. Dolmabahçe Mosque, whose real name is Bezmialem Valide Sultan Mosque, but is considered within the whole of Dolmabahçe Palace due to its location, was opened for worship with a Friday ceremony on March 23, 1855, after a construction period of more than two years. The most distinctive formal feature of the mosque is that it has a clear setup and geometry. Mosque and sultan's sections seem to have been designed separately and then combined depending on their functions. The mosque is a domed and high mass on a square planned infrastructure. The Hünkar section is a rectangular prismatic and lower mass. These two masses are joined in the direction of the north facade of the mosque.