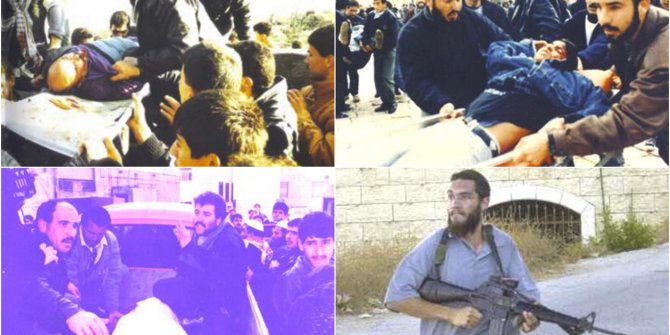 In the city of Hebron in Palestine, 67 Muslims were martyred and nearly 300 Muslims were wounded with a fire opened by a Jew on the congregation, which was performing the morning prayer on Friday, February 25, 1994. After the incident, Hz. The İbrâhim Mosque was closed for eight months.

In the city of Hebron in Palestine, 67 Muslims were martyred and nearly 300 Muslims were wounded with a fire opened by a Jew on the congregation, which was performing the morning prayer on Friday, February 25, 1994. After the incident, Hz. The İbrâhim Mosque was closed for eight months. Since 1948, many massacres took place in Palestine, which was occupied by Israel. One of the most important of these attacks was the attack on the Halil İbrahim Mosque in the city of Hebron during the morning prayer on February 25, 1994. A settler civilian invader who came to the mosque during prayer opened fire with an M-16 automatic gun, killing 29 people and injuring 125. After the massacre, the mosque was closed for eight months for renovations. When it was opened, the occupying regime built two-thirds of the synagogue and put surveillance cameras in the area left as a mosque. Magnetic control devices were placed at the entrance.

THE PERSON ATTACKING THE MOSQUE WAS DOCTOR OF US ORIGIN

The person who attacked the mosque was a US doctor named Baruch Goldstein. Since his gun was jammed, he was lynched by those who survived the attack. Talâl Abu Sinine, one of those who witnessed the event, describes how Muslim youths threw on the monster Goldstien and killed him as follows: 'Some young people stood up and marched on the murderer and killed him. The name of the young man who first took action and walked towards the mosque was Selim Idris. The second was Nemir Muhahid. Later, both of them became martyrs. ' It is reported that the occupation soldiers carried out a separate massacre during the transportation of the wounded to the hospital and the number of dead and wounded increased. Occupation management Hz. He tried to make the massacre of the Ibrahim Mosque accepted by the world public as a massacre committed by an ultra-religious Jew. It is understood from the statements of the witnesses that the massacre was carried out with the knowledge and help of the occupation administration itself. After the massacre, a monument was erected in the Kiryat Arba Jewish settlement, right next to the city of Hebron. The monument, which was destroyed several times upon the reactions of the occupiers, still attracts a heavy flow of visitors from other Jewish settlements.

THEY PERFORMED A SECOND MASSACRE

The occupying forces closed the doors of the mosque harem and prevented those trying to get out of prayers or reach the martyrs and wounded from outside, and then carried out a second massacre during the transfer of the wounded to the hospital. Then, during the bidding of the martyrs to the hereafter, they followed the people to the cemetery and completed the massacre there. Thus, on the fifteenth of the month of Ramadan in H. 1414, during the morning prayer on 'Bloody Friday', 67 Muslims were martyred and nearly 300 Muslims were wounded in the horrible massacre that was initiated by a monster and continued by invading soldiers who shared the same ideas and feel the same.

The mosque in question is a source of trouble, similar to the Al Aqsa Mosque (Masjid-i Aqsa). Hz. There is a prophets cave, which Abraham bought when he came to Hebron and is rumored to have lived for many years. This cave is considered one of the most sacred places of the Jewish religion. It is rumored that the temples built by the Jews on this cave while in Palestine were destroyed by the Romans. Halil İbrahim Mosque was built after the region came under Muslim control. After centuries, the Jews invaded wanted to use the Halil İbrahim Mosque as a synagogue. These requests were met with reaction among Muslims. The massacre in question is a product of this conflict. After the massacre, the mosque was closed for more than eight months. When reopened, it was seen that more than half of them were organized as synagogues. The part of the mosque reserved for Jews was expanded to cover two-thirds, besides, a limit was placed on the number of prayers in the part belonging to Muslims, and hidden cameras were placed in different parts of the mosque and observation areas were built so that this part could be observed by the soldiers. Only one of the main gates used by the Muslims was left open and all the others were closed. Magnetic control devices and special surveillance compartments were placed in the door that was left open. With these arrangements, the mosque was transformed into a police station.