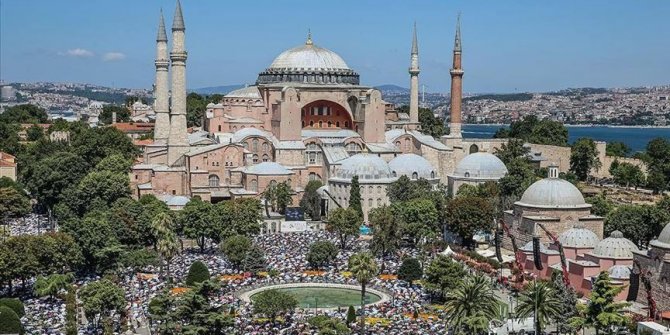 Japanese media allocated wide coverage for reopening of the Hagia Sophia Grand Mosque for worship after an 86-year hiatus, while Qatari media called it a historic day.

Japan’s Asahi Shimbun covered the first Friday prayers after reconversion of Hagia Sophia to mosque from museum, and said worshippers filled all streets two hours before the prayer time.

Featuring a photograph of Turkish President Recep Tayyip Erdogan reciting the Muslim holy book Quran, it said Christian patterns covered with curtains inside the building will be opened after the prayers, and the Hagia Sophia Grand Mosque will be free of charge for all visitors.

Yomiuri Shimbun said the world heritage Hagia Sophia is opened for worship. It also included background information about the historical building, saying that together with the conquest of Istanbul, Hagia Sophia became under the control of Ottomans.

Tokyo Shimbun, in a story titled First Friday Prayer in Hagia Sophia, said the world heritage in Istanbul was reconverted to a mosque after 86 years, with the decision of Erdogan.

Qatar's Al-Sharq newspaper quoted Erdogan’s statement in one of its headlines, saying: “[The Hagia Sophia Grand Mosque], as a cultural heritage of all humanity, is a place where everyone from any religion can come and visit.”

The daily widely covered the first Friday prayers, as well as the statements of the Turkish officials.

Daily Raya, on its first page, said: “Hagia Sophia is thriving with worshippers on a historic Friday.”

It also quoted the special Friday khutbah, or sermon, read out by head of Turkey's Religious Affairs Directorate (Diyanet) Ali Erbas, saying: “Under the dome of Hagia Sophia, I invite all of humanity to embrace justice, peace, compassion, and equity. I urge you to foster universal values and moral principles that protect the honor of being a human being."

Calling it a historic day for Turkey and the Islamic world, daily al-Watan said Erdogan recited Quran in the first Friday prayers in Hagia Sophia.

It also voiced hope for the Islamic community to acquire its magnificence again after regaining the unique historical building.

Noting that around 350,000 people joined the collective Friday prayers, it said: “Brotherly Turkish nation and the Islamic community have a joy that exceeds borders.”

Besides being a functioning mosque, Hagia Sophia is also among Turkey’s top tourism destinations for domestic and foreign visitors alike.

Erdogan and other Turkish leaders had long advocated it returning to a working mosque, open for worship.

On July 10, a Turkish court annulled a 1934 Cabinet decree that turned Hagia Sophia into a museum, paving the way for its use as a mosque.