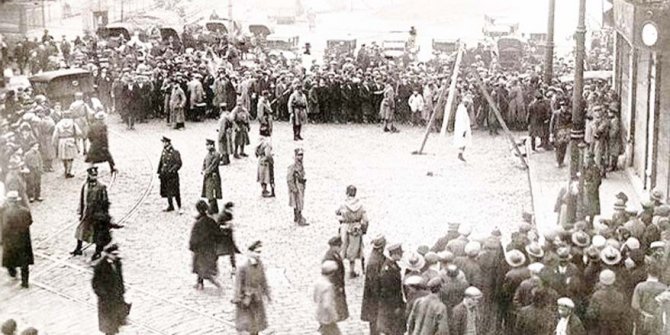 The black mark of our history: Independence Courts

The courts of Independence have signed the bloodiest decisions of our history and our country.

The courts of Independence have signed the bloodiest decisions of our history and our country. These mobile courts, which were made up of unlawful names in the Independence Courts, where official history and popular culture did not pay much attention, ordered the execution of many innocent people. The Independence Courts were such courts that the defendants were not questioned, those who judged were not lawyers. This is why he did not emphasize it neither in history books nor in newspapers. The Independence Courts have been one of the dark spots of our history, even though reasons such as "it was necessary at that time" by some sections. before and after the Republic was founded in ongoing Independence Courts, passed into history as the most embarrassing Turkey's courts. The Independence Courts executed very important scholars of these lands, although they came out in the name of the War of Independence. Regarded as the biggest embarrassment of the Republic, the Independence Courts and the murders they committed are unfortunately not brought to the fore as necessary. How these courts were established, who was sent to the death row, unjust and extrajudicial executions; newspapers, books and other media do not bring it up. But these courts, which were not brought up, were the only reason for thousands of murders. These courts stated that the law was suspended, human rights were disregarded, murders were legitimized and certain mentalities were ratified; so to speak, it went down in history as a disgrace.

HIYANET-İ STARTED WITH THE LAW OF CITIZENSHIP

Turkey on April 23, 1920 up from around none of the deputies did not have a personal interest in coming to Ankara and none was no debt of gratitude to another. The aim was to establish the will of the people and success was certain. The issue was the country. In those days, the last shelter was the only country to go away. On April 23 that year, the first Assembly was opened with prayers and takbirs with a purpose. The biggest problem at that time was that there were deserters. For almost a century, the villages were left without men and children without fathers due to uninterrupted wars. This is why the nation looked away from the new war. On the other hand, the Istanbul-Ankara dilemma was continuing in Anatolia. Therefore, the first job of the Assembly was to enact the Law of Hıyanet-i Vataniyye. The law was enacted on April 29, 1920 and Independence Courts were established for this purpose. Independence Courts were closed on 17 February 1921, except in Ankara. The second term Independence Courts started their work on July 30, 1921 and continued their activities until October 1923. The third and last period Independence Courts were effective between 1923 and 1927.

THE NUMBER INCREASED TO EIGHT

First semester; Between September 18, 1920 and February 17, 1921. After the approval of the Independence Courts Law, Chief of General Staff İsmet Pasha made a proposal for the establishment of 14 Independence Courts. However, as the number was high, 7 court areas were determined. When it was accepted to establish a court in Diyarbakır a month later, the number rose to eight: Ankara, Eskişehir, Konya, Isparta, Sivas, Kastamonu, Pozantı, Diyarbakır. These courts were set up for treason and deserters. Second term; Between 30 July 1921 and October 1923. It was first established in Kastamonu on 19 August 1921, in Konya on 12 August 1921, in Samsun on 17 August 1921 and in Yozgat on 22 September 1921. In the Second Independence Courts, deserters, those who aided the enemy in the War of Independence and those who rebelled were tried. In this period, the Independence Courts started the first abuses. Third term; It took place between 1923 and 1927. It was established during riots and states of emergency. The Eastern Independence Court was established in Diyarbakır on April 6, 1925, after the uprising of Sheikh Said. These courts were established in Istanbul and Ankara to try those who objected to the fall of the caliphate and the sultanate, those who rejected the law on dress and hat, and those who criticized the proclamation of the Republic. Since this date, the Independence Courts have caused countless murders and atrocities. The people could not live their own culture and religion, and a cultural assimilation period began under the name of reforms. Anyone who opposed or criticized this assimilation was tried by the Courts of Independence and many innocent people fell into the blood of these courts with the orders they received. The Independence Courts were re-established first in Izmir and a few days later in Ankara, on the pretext of the Izmir assassination that Mustafa Kemal was alleged to be done on June 14, 1926. And with this excuse, the murders continued unabated.

It is known that many people are hung because of hats at the Independence Courts, but there is one that cannot understand his story. There is also a woman in the 23 gallows established in Kahramanmaraş on 24 November 1925. Şalcı Fame Head. She was a mother who knitted handcrafted shawls and sold them in the bazaar to take care of orphans in Erzurum. When the government suddenly orders to wear a hat, the people of Marash march towards the city center in protest with the rumors that spread. "Your boys are holding the government to stone, go have them," he told Fame Bacı, who came out of the women's bath at that time. someone says. Şalcı Bacı is an impulsive woman. As he jumps out of the bathhouse with his bundle, he goes to the government house. When he sees the friction between the soldiers and the people, he starts looking for his children. Unable to find him, he thinks that the soldiers have taken over his sons. Shouting with a feeling of motherhood, he throws the clogs in his bundle at the soldiers and makes bad words about the hat. Without realizing what happened, he was arrested, tried and hanged with 22 men. According to the legend, "I am a chick person, what do I have to do with the hat?" even if he says, he can't make anyone listen. When he is executed, a sack is put on his head so that he is not recognized as a woman. She becomes the first and only woman executed in this process.