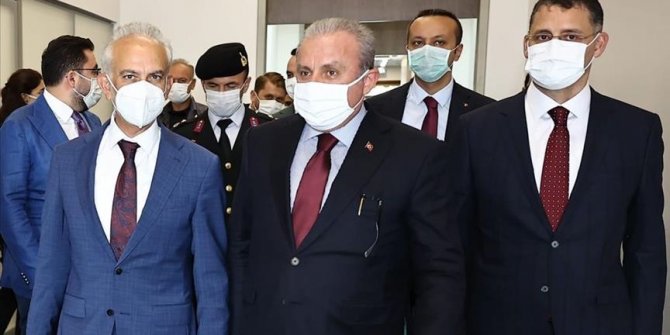 Mustafa Sentop set to attend meeting with heads of parliaments of Azerbaijan, Pakistan on Tuesday

The Turkish parliament speaker on Monday arrived in Azerbaijan to attend a meeting with the heads of parliaments of Azerbaijan and Pakistan.

During the meeting scheduled for Tuesday, a signing ceremony will be held to ink the Baku Declaration.

Before the meeting, Sentop and other parliament speakers will be received by Azerbaijani President Ilham Aliyev.

Sentop is also expected to participate in the wreath-laying ceremony at late Azerbaijani President Heydar Aliyev's Mausoleum and Alley of Martyrs. He will also pay a visit to the Baku Turkish Martyrs' Cemetery.

He is also set to meet with Azerbaijani Foreign Minister Jeyhun Bayramov on Wednesday.

Sentop, who will receive representatives of non-governmental organizations and Turkish businesspeople, will return to Turkey on Thursday after visiting the cities of Shusha and Fuzuli, which were liberated last year from Armenia's nearly three-decade occupation.*Writing by Jeyhun Aliyev from Ankara