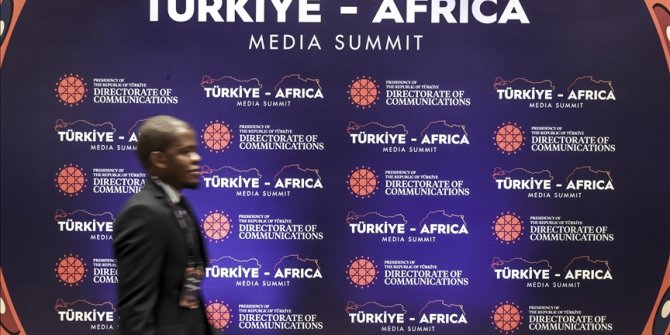 A two-day summit marking Africa Day kicked off in Istanbul on Wednesday.

In his opening speech at the Turkiye-Africa Media Summit, Turkish Communications Director Fahrettin Altun said he hopes the summit will "strengthen our friendship, enable us to get to know each other better, and create new cooperation opportunities in the field of media."

Adding that Turkiye-Africa relations have gained momentum in the past 20 years, he said Turkiye's interest toward the African continent is based on "equality and mutual gain."

Recalling that Turkiye joined the African Union as an observer in 2005 and participated in and organized many summits, including the latest Turkiye-Africa Partnership Summit in Istanbul in December, Altun said: "Turkiye's interest in Africa is sincere, long-term and based on win-win principle."

"Turkiye's ability to see itself as a true partner with African states, to express this thought and to find a response to these feelings from our African friends directly stems from the absence of colonialism in our history," he said.

Praising the efforts of Anadolu Agency correspondents reporting in Africa, he said that the launch of TRT French was also a "good development."

"Thus, we have implemented an important project to make the voice of Africa be heard in the world and to deliver accurate information about Turkiye to French speaking countries," he said.

"We also believe that we can provide better promotion of Africa in Turkiye by these means," he added.

Turkiye also desires a "strong cooperation" with all African countries in the fight against disinformation, he stressed.

A range of issues will be discussed, including post-pandemic challenges in journalism, journalism under digital siege and women in journalism, at the event organized by Turkiye's Communications Directorate.

The program aims to strengthen Ankara's cooperation with African media outlets and professionals.